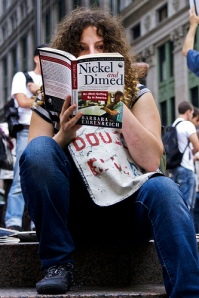 So, I just finished reading ‘Nickel and Dimed: On (not) getting by in America.  It’s an old book. It was published in 2001, which means that the author’s ethnographic research was taking place in late 1999.  For those of you who haven’t heard of this book or don’t know Barbara Ehrenreich, it’s incredible! It’s the story of how a writer goes undercover in the world of the working poor (people who make minimum wage in America) and what she discovers there.

This post isn’t long enough to sing the praises of this book in the way I want to, and this blog isn’t about social issues, like poverty, but at one point in the book Ehrenreich is living in Minnesota, conducting her experiment on whether or not she can get by working at Wal-mart and still have enough money to eat and pay rent.  She realizes that despite working full-time, due to the fact that Wal-mart, like so many minimum wage employers, holds back an employees first check until they quit (ridiculous!) she has made on $43 in three weeks time.  In case you’re wondering, this is the (not) getting by in America part. At this point, it’s case closed for her…game over.

There are some experiences we have that make the first step clear for us, and it’s the only step we are asked to do perfectly.  I admit I am powerless.  When you are living at a motel and they literally change the lock code if you don’t pay and you have made $43 in three weeks, you are powerless over what happens next.  When you are sitting (somehow) behind bars, having racked up your 1st, 2nd, or 3rd, DUI and you’re wondering, how did I get here…powerless.

Lack of power was our dilemma. And I think that’s a tough concept for alcoholics and addicts, because as a whole, we tend to be very crafty people who are good at getting our needs met one way or another. Also, most of us like to spin things around in our head for awhile in an attempt (sometimes) to manipulate the data. What is powerlessness and what does it look like when it comes to addiction?

The truth is that it looks different for everyone. There are many places to get off the pain train (as a friend of mine used to call it in L.A.) and try a different way of living.  But I think that whatever the external circumstances of powerlessness look like, the internal circumstances go something like this:

Alcoholism is a simple disease, but understanding it is baffling sometimes.  It doesn’t have to be if we keep it simple and don’t turn AA into therapy.

When we can say and understand these things about our drinking, we are ready to move on, but the key to beginning a program of action in AA is that we have to stay physically sober, NO MATTER WHAT!